Aging in Nature – It’s Never Too Late to Play Outdoors! 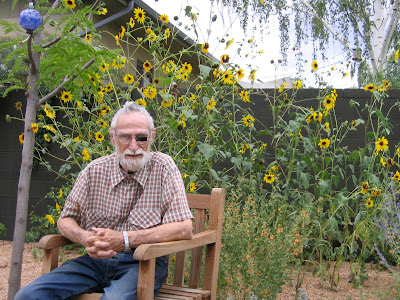 “Mac” in his garden in Santa Fe, NM

In my next few posts, I’m going to focus on the over 60 set, as there’s a lot of great research and design about therapeutic landscapes for seniors. This is such an important area of our field. Having access to and being active in the outdoors is good for everyone, but I would venture to say (backed up by research) that it’s especially critical for the youngest and oldest generations.

Young kids need fresh air, sunlight (remember rickets? It’s coming back because kids aren’t getting enough Vitamin D!), exercise, and the sense of discovery that only the natural world can provide; it’s essential for physical, mental, and emotional development.
And much later in life, as getting out and about becomes more difficult, interaction with nature becomes all the more important – perhaps even more so than in between youth and old age. Exercise maintains health by stimulating blood flow, keeping muscles strong and ligaments flexible, and by maintaining bone density and strength. Staying interested in the outdoors provides continued sensory stimulation, which keeps the mind as well as the body active and strong. Getting outside also facilitates social interaction, a critical factor in maintaining well-being. More specifics on all of this, and mentions of good resources, in the next few posts.
In the meantime, a personal story: Above is a picture of Mac. He was my neighbor in Santa Fe, before I moved to the Hudson Valley, and he hired me to design a garden for him and his wife. They both had loved to garden in their younger years, but due to her very limited mobility and his near-blindness (that’s black tape over his glasses lens, before he got an eye patch), they had stopped. Their back yard was a wasteland of weeds and gravel that was impossible to navigate. We worked on a plan that would provide a smooth walking surface (colored concrete) with several places to stop along the way, as well as destinations to move toward; plants that provided shade, seasonal interest, sensory stimulation, and that attracted wildlife; and a design that they could also see and enjoy from inside the house, and that would entice them outside (in sight = in mind).
And we were pretty successful. The week that the garden was finished, Kay – who had not been in her back yard for years, and who hardly went outside period – ventured out with her walker, with Mac by her side. After that, they walked through the garden every day, several times a day. In good weather (which in Santa Fe is most of the time) they walked to “their” apple tree (they had planted it as a sapling decades ago), the farthest place from the door, and sat side by side in its shade, gazing out, commenting on the darting hummingbirds, or what was blooming, or how much water the mossrock boulders had collected in the afternoon’s rainstorm. After a few months, I started to see them walking up and down the sidewalk on the street as well – Kay had gotten strong enough to venture out of their small back yard garden and take on the more challenging slope of our street. This was especially encouraging because it meant that she had the opportunity to interact with neighbors, thereby broadening a social circle that had gotten pretty darn narrow.
So, this is but one of many, many examples of the power of one healing garden to change and improve someone’s quality of life. It’s never too late to play outdoors, and it’s up to us to help make that happen. Do you have a good example that you’d like to share? Please leave a comment! I would love to start gathering more of these stories, because as convincing as the quantitative research is and as much as we need it, I think it’s the personal stories that resonate and motive individuals. If you can share images, too, all the better. 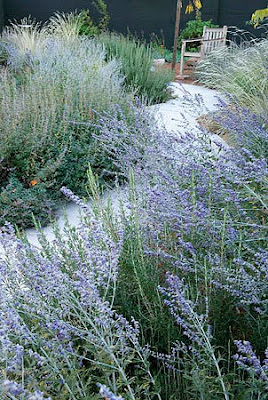