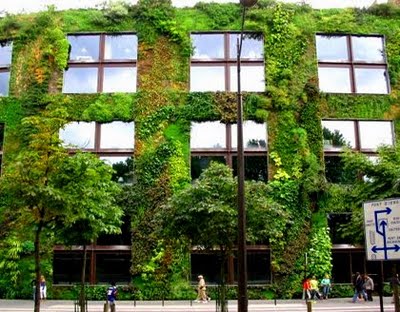 One of the key elements of a healing garden – a garden designed to facilitate and even improve people’s health and well-being – is a high ration of plant material (“softscape”) to paving, walls, stairs, etc. (“hardscape”). More plants, less paving.

And especially if we’re talking about hospitals and other healthcare facilities, which is where healing gardens are needed most, people like a lot of softness and greenery to balance out the hard, sterile surfaces indoors. People also prefer a feeling of enclosure – it makes them feel safe and secure, and can delineate spaces for private reflection and conversation.

So, what better design element than a green, living wall? Patrick Blanc made a big splash with his (absolutely gorgeous) vertical gardens a few years ago, and since then, the market for green walls has exploded. I’ve been surprised at how slowly it’s catching on in the healthcare environment. Seriously, wouldn’t it be great if all of the hospitals and clinics and hospices and nursing homes had soft, green, living vertical surfaces instead of concrete walls and vinyl fences and strange partitions that don’t really work in delineating space? 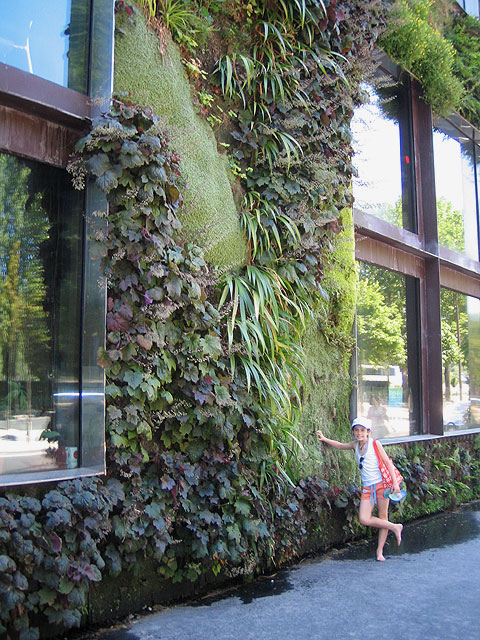 Another plus about vertical gardens: They are easily accessible to just about everyone. Whether you’re standing on two feet or wheeling in a wheelchair or a stroller, the plants are at your height where you can reach out to touch and smell, or even to garden in. What a fantastic tool for horticultural therapists!

Here’s an example of a custom-designed wall by Hitchcock Design Group for a continuing care retirement community (CCRC) in Hyde Park, Chicago: 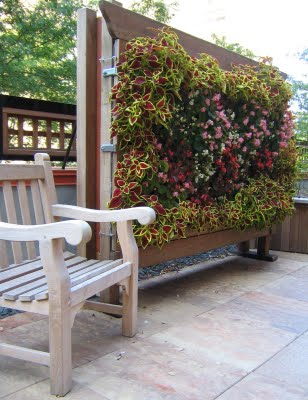 If you’re interested in the confluence of plants and architecture, definitely check out Jason King’s blog Veg.itecture (their tagline is “investigating green architecture.”).

And if you know of any healthcare facilities with vertical green walls – fixed or freestanding – please leave a comment. We’re trying to build a list for the Therapeutic Landscapes Network.

Here’s one last image, from a new company called Woolly Pocket Garden Company. Check out their blog. I especially like the posts about the Edible Staircase and the Edible Schoolyard, two programs with kids in Los Angeles schools. 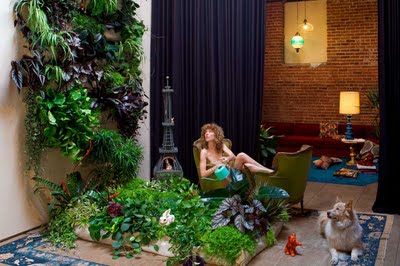 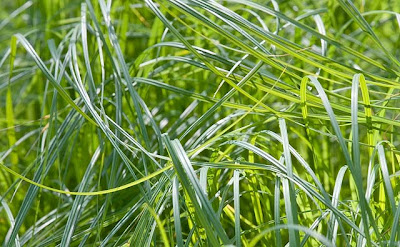 It’s a balmy 41 degrees here in the Hudson Valley today. I’m not being sarcastic! Anything over 40 degrees is a welcome change, and it’s sunny to add…hm, what’s the opposite of adding insult to injury? Icing to cake?

Anyway, it was warm enough for me to get out and garden for the first time in months, and it felt really good. Not much to do yet, but it is the time to cut back any perennial stalks that you left up for the winter for vertical interest and birds, and it’s also time to cut back your ornamental grasses, which is what I did today. Note to self: Next fall, plant lots of bulbs amidst the grasses so that something green and colorful will be coming up after the grasses have been cut back and before they start to grow in again. More on this in a minute.
Ornamental grasses are a wonderful plant for any garden, including the healing garden. Many people think that a “healing garden” has to have medicinal plants. Not necessarily so! While herbs are certainly great – for actual medicinal use, or as symbols of healing, or just because they smell good and are therefore a delight to the senses – many more healing gardens don’t have any medicinal plants at all, or they have a mix of herbs, vegetables and fruit, trees, shrubs, perennials, annuals and any other kind of plant material that seems appropriate for the intended user (the technical term for the person who will be enjoying the garden) and the space.
Here are some reasons why I think ornamental grasses are ideal for healing gardens:
1. They are beautiful! Aesthetically speaking, ornamental grasses really do it for me. So reasons #1-6 all have to do with beauty. 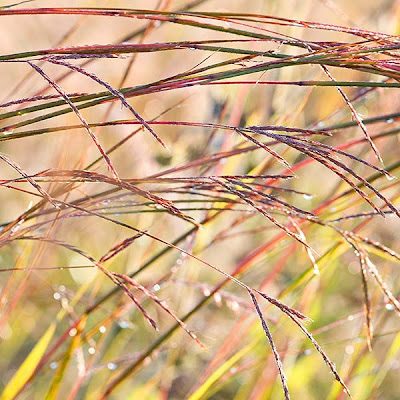 2. Color: Who can resist the bright and rich greens, bronzes, tans, and even reds of grasses, a constantly shifting display of color throughout the year? From the moment they emerge from the ground to when they get cut back in the spring, grasses put on a show of sometimes subtle, sometimes stop-in-your tracks color variation. 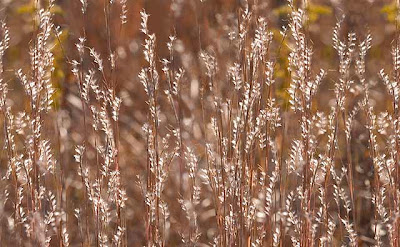 3. Play with light: If you’ve ever seen bright-red Japanese bloodgrass (Imperata) in summer or copper little bluestem (Schizachyrium scoparium, above) in autumn backlit by the sun, you have experienced a thing of true beauty. Sometimes it’s the foliage that gets highlighted, sometimes the flowers, and sometimes both; when you’re thinking about where to site grasses, keep in mind where the light comes from; backlighting can have a really dramatic effect.
4. Movement: Most grasses are very light and airy, and therefore catch the slightest movement of air. There’s something enchanting about seeing grasses dancing and shimmering in the breeze. 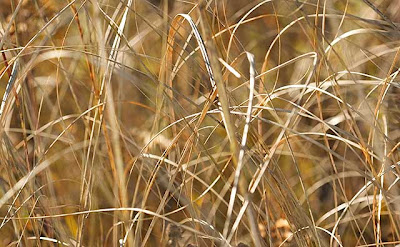 5. Seasonal interest: Most grasses offer almost four whole seasons of interest. There’s about a month in the early spring when they get cut back (hence the note to self about bulbs to fill in the gaps), but other than that they put on a great show year-round with changing colors of foliage and flowers, and with texture as well. Like evergreens but with more variation, they provide a kind of structure and continuity in the garden as other plants around them appear, grow, bloom, fade, and go dormant again.
Other great reasons to use grasses:
7. Sound: Many ornamental grasses make a rustling sound when moved by the breeze, bringing an element of sound into the garden. That gentle “ssshhh” adds another layer to the sensory experience, and can even stand in for visual elements in gardens for the visually impaired.
8. Critter-proof! Whether you’re battling squirrels, deer, Japanese beetles or any other kind of pest, grasses are pretty tough. Most animals (other than my dogs – they love to chew on some of my grasses!) don’t like them.
9. Low maintenance: As mentioned above, most ornamental grasses are pretty good at fending for themselves. Other than being cut back in the spring, they don’t need the pruning, staking, deadheading, raking, etc. that we have to do for our other beloved garden inhabitants.
10. Good in containers. Grasses do well in pots and other containers, making them excellent candidates for small-space, rooftop, and other types of container gardens. They can act as nice vertical and or/softening accents, they are often drought- and wind-tolerant, and they (usually -see below!) get along well with their neighbors.
Caution Caveat: A few species of ornamental grasses (especially pampas grass) have very sharp blades (I guess they don’t call them blades for nothing); if you’re using grasses for a children’s garden or another space where people might grab hold or have to brush past, make sure to plant the kinder, gentler, touch-friendly species.
Also, a few species of ornamental grasses do not make good neighbors; they can be a garden nuisance (Hakonochlea and Stipa tennuissima, for example) or even a threat to native grasses and other flora (especially pampas grass, runner bamboos, and varieties of Miscanthus in some parts of the country). So whether it’s your own garden and especially if it’s a garden for a client, do your homework: Make sure you’re not saddling yourself or someone else with a lovely but unruly beast! Here are a couple of articles to start you off: “Native and Invasive Ornamental Grasses” and “Bad Boys of Ornamental Grasses.“
Oh, and one more thing: Here’s an interesting article on caring for ornamental grasses – turns out it depends on whether they are really grasses (vs. sedges or rushes). Thanks to gardenmentor for sending me the link on twitter! 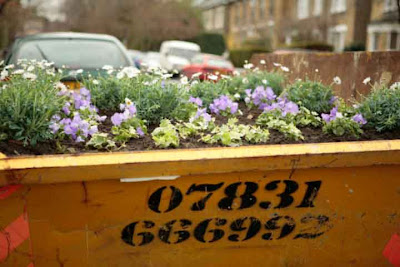 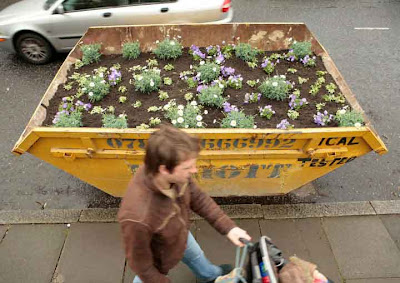 Who says you need a yard for your garden? Oliver Bishop-Young has thought of – and implemented – some very creative uses for dumpsters (called skips in the U.K.), including gardens. Click HERE to see more great examples including lawn, water garden, and swimming pool. Now that’s dumpster diving I can get into!  Thanks to James Westwater for turning me on to this.