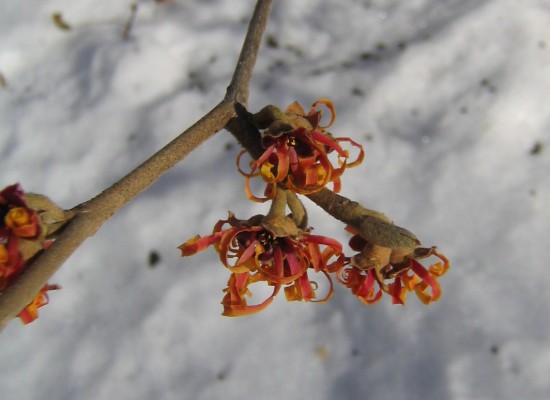 Well, it wasn’t easy coming home to below-freezing temperatures yesterday after spending a week of summer in tropical Peru. My “office” on Saturday was in the hotel courtyard in Lima. 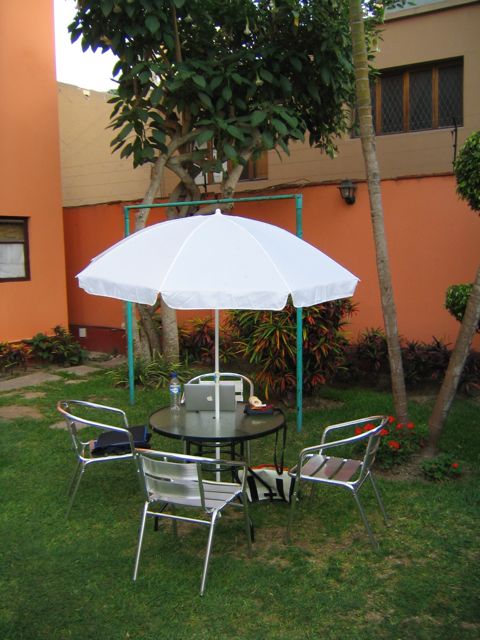 Today I’m back inside, working by the glow of the pellet stove, once again bundled in long underwear and wool, with a freshly fallen blanket of snow on the ground outside.

But yesterday as I was walking through the mostly snowcovered landscape of my winter garden, I encountered a welcome surprise: My witch hazel has bloomed! This variety, Hamemelis x intermedia ‘Jelena,’ tends to bloom earlier than some of the others like ‘Arnold’s Promise.’ Last year, a mild winter, flowers were already appearing at the end of December. Not so this year – record cold and snow has kept those buds closed up tight. I was beginning to wonder whether they would ever release their grip. A couple of warm days last week were enough to coax them into emerging.

One of my first blog posts ever, from January 2008, was about Jelena. Here’s an excerpt: 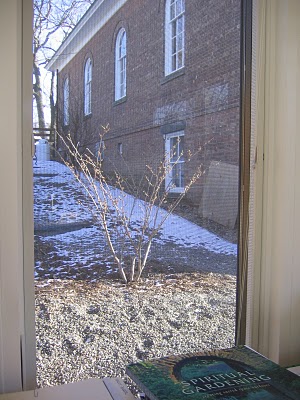 It’s 23 degrees Fahrenheit outside, the warmest it’s been all day, and this is the view from my office window here in Beacon, NY. Now, to some of you this may look rather bleak – the last windswept vestiges of last week’s snowfall, the winter sunlight just barely lighting up that north side of the garden, and a puny tree with no leaves, only bare branches. Well, let me tell you, that tree is a witch hazel, Hamamelis x intermedia ‘Jelena,’ and every time I look at her, a smile creeps across my face. You see, “Jelena,” as I like to call her, holds great promise: The promise of spring, and soon. I learned to appreciate witch hazels in Providence, RI on wintry walks to and from work, and have wanted one (at least one!) in my own garden ever since. I knew when I planted Jelena that long before anything else was even thinking about emerging from dormancy, this intrepid tree would begin to bloom, pushing forth bright red (or yellow or orange, depending on the variety) fingers of delightfully scented blossoms from soft, velvety buds. And today I checked and sure enough, inside of those tight fists of buds are bright red spots promising blossoms in a month, maybe a little more, maybe a little less. Spring in February/March in New York, not too shabby.

My harbinger has announced spring’s imminent arrival. What about you? What signs of spring are you seeing in your garden?