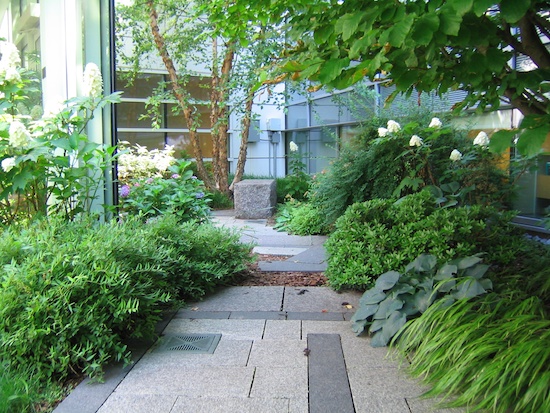 On my visit to one of three healing gardens last week in Boston, I waited in the hospital lobby for someone from administration to meet me. A pajama-clad man, connected through various tubes to an IV pole, ambled slowly by, his expression a combination of concentration and resignation. Someone grimaced while maneuvering, with difficulty, a wheelchair bearing the profound weight of an obese middle-aged woman. Doctors and interns in their scrubs and stethoscopes whisked quickly through the space to whatever important task awaited them.

And it dawned on me (not that this hasn’t occurred to me before, but there was something different, perhaps more immediate or visceral, this time): As much as hospitals are places for birth and healing, they are also inherently places of pain, sickness, and death. Most people begin their lives and bring forth new life in the hospital, and that is a wonderful thing. But other than that, we don’t really want to be there. Hospitals are where sick and injured people go to be healed, sometimes successfully, sometimes not. Thus, they are places that elicit uncertainty, fear, and sadness.

And the environment itself, designed to be clean and efficient, is therefore sterile, intimidating, and alienating. It is so far from what most of us experience in our day-to-day lives.

And then there’s the garden. If you’re lucky, your hospital has a garden. And if it’s a good one, it’s an antidote, a life-affirming oasis, a desperately needed contrast to the strange machines, shiny surfaces, alien sounds, and assaulting smells. Gardens are about life. They contain green, living things; fresh air; birds; water. There is death in the garden, too, of course; plants don’t live forever. But somehow, even their death feels more natural, more just part of the cycle of life rather than a startling and traumatic interruption. And often even when plants look like they have died, we know that they have simply gone dormant: Autumn comes, leaves turn color and fall to the ground, and everything goes into hibernation. Then spring arrives and, as if by some miracle, green shoots emerge from the earth, from buds and branches. And the cycle begins again.

There is so much hope and promise in a garden. As Maude tells Harold in my all-time favorite movie, ‘Harold and Maude’:

“I like to watch things grow. They grow, and bloom, and fade, and die, and change into something else. Ah, life!”

Here’s a clip that includes that scene and the daisy scene, which comes right after: http://www.youtube.com/watch?v=h4-xMPTduds&feature=related.

The biologist E.O. Wilson termed our affinity to nature “biophilia” – an innate attraction to life and living things.

So that was my realization. Without going into a zillion caveats, which I’m usually wont to do: Hospital = pain and sickness, and sometimes death. Garden = respite and life and hope.