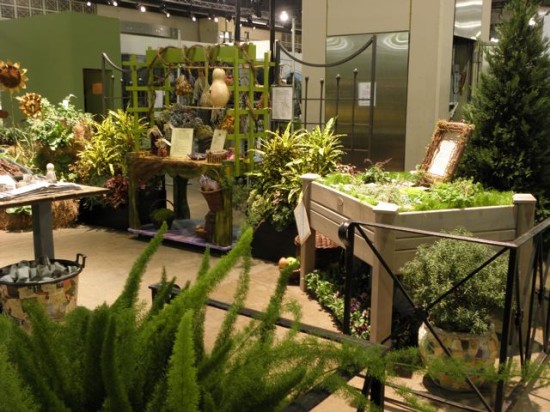 Happening now! I wish I could go to the Philadelphia Flower Show (March 5-13) this year. But since I can’t, I can at least publish a post about it, right? Here’s a blurb from the AHTA website:

The exhibit, in keeping with this year’s theme “Springtime in Paris” is titled “Liberte, Egalite, Accessibilite” (Freedom, Equality, Accessibility). Featured will be a Parisian Potager showcasing ideas for recycling, sustainability, plants, and ways to garden in small spaces . The goals of the exhibit will be to educate the public about how horticultural therapy (HT) can enhance one’s well- being, teach new skills, distract from pain, reduce stress and isolation, to provide fun and meaningful work in a way that is life-affirming.

Gabriela Harvey posted this update on the TLN Facebook page:

“AHTA Exhibit at the 2011 Philadelphia Flower Show won “Best in Show” in the Non-Academic Educational Category. A special thank you to the committee and to each MAHTN and AHTA member who will man the exhibit as a volunteer. Special kudos to …Sarah Hutchins, Pam Young, Peg Schofield, Jack Carman and Martha Heinze and Carol Lukens!!! Hope I did not miss anyone?”

And Carol Hutchin, Task Force Chair, updated us on Sunday with this:

“I just heard from co-chair we have also received an additional award, a special achievement award from The Garden Club Federation of PA (education exhibit under 1,000 ft.). People have been pouring through our exhibit all yesterday and today (Sunday)! The response from attendees and several judges, who spoke to us yesterday, was very supportive and congratulatory! A very special thank you to all the committee members ( MAHTN and AHTA) who worked so diligently and well together to create the exhibit, as well as all the volunteers who are manning and maintaining it, the donors who gave us so much to make it come to life, AHTA who sponsored it this year and MAHTN who started it all by sponsoring the HT exhibit in the Flower Show last year.

Congratulations, and thank you!