It’s in the Dirt! Bacteria in soil may make us happier, smarter 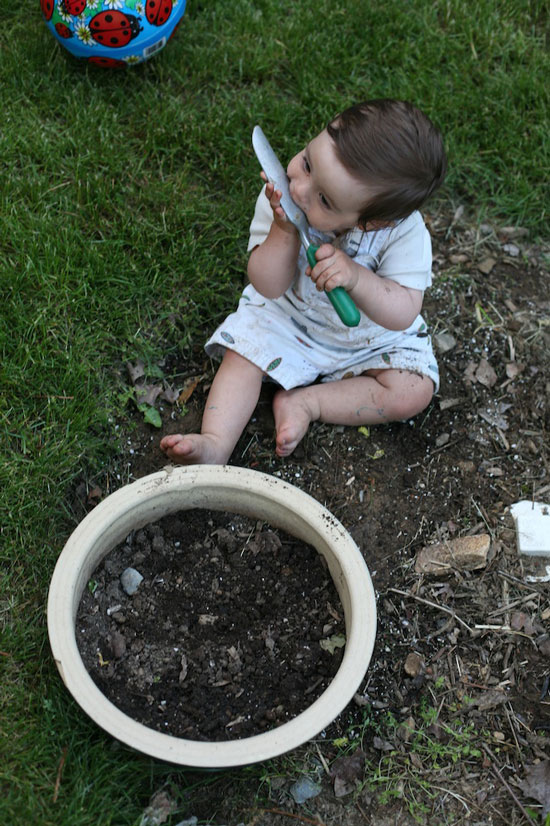 A big thank you to Horticulture Magazine for featuring this post on their website. We are honored to be chosen as one of their Best Gardening Blogs 2011!

AND to the National Wildlife Federation for featuring this article as a guest post on their blog!

Many people, including me, talk about the restorative benefits of gardening (see last Tuesday’s post, for example) and the reasons why it makes us feel good. Just being in nature is already therapeutic, but actively connecting with nature through gardening is value-added. And why is that? All sorts of reasons have been posited: It’s a meditative practice; it’s gentle exercise; it’s fun; it allows us to be nurturing and to connect with life on a fundamental level.

And some recent research has added another missing piece to the puzzle: It’s in the dirt. Or to be a little more specific, a strain of bacterium in soil, Mycobacterium vaccae, has been found to trigger the release of seratonin, which in turn elevates mood and decreases anxiety. And on top of that, this little bacterium has been found to improve cognitive function and possibly even treat cancer and other diseases. Which means that contact with soil, through gardening or other means (see Elio, above), is beneficial. How did this discovery come about?

Mary O’Brien, an oncologist at Royal Marsden Hospital in London, first stumbled upon these findings while inoculating lung cancer patients with a strain of M. vaccae (pronounced “emm vah-kay”) to see if their symptoms improved. She noticed that in addition to fewer cancer symptoms, patients also demonstrated an improvement in emotional health, vitality, and even cognitive function.

Dr. Chris Lowry, at Bristol University, decided to explore O’Brien’s discovery. He hypothesized that the body’s immune response to the bacterium causes the brain to produce seratonin. Lack of seratonin is one symptom, or perhaps even cause, of depression. He injected mice with the M. vaccae (pronounced “emm vah-kay”) and then observed both physiological and behavioral changes. He found that cytokine levels rose – cytokines are part of a chain reaction, the end result of which is the release of seratonin. To test behavioral stress levels, Lowry put the mice into a miniature swimming pool, knowing that although stressed mice get even more stressed by swimming, unstressed mice don’t seem to mind. And voila! His M. vaccae mice did not exhibit higher stress levels after swimming.

Could M. vaccae be used as a sort of vaccination to treat depression? Possibly, and it is still being explored as a treatment for cancer, Crohn’s disease, and rheumatoid arthritis. For a more detailed but still understandable summary, see this article in The Economist, “Bad is Good.”

More recently, Dorothy Matthews and Susan Jenks, at the Sage Colleges in Troy, NY tested the findings, again on mice, but this time by feeding the bacterium to them rather than injecting it. They fed the mice tiny peanut butter sandwiches with a little M. vaccae smeared on. Yummm.

Then they ran the mice through a difficult maze. Compared to those that did not ingest the bacterium, the M. vaccae mice “navigated the maze twice as fast and exhibited half of the anxiety behaviors.” Seratonin is also thought to play a role in learning, so it may have helped the mice not just by making them less anxious but by facilitating greater concentration. Once the bacterium was removed from their diet, they continued to perform better than the control group for about three weeks. As the bacterium left their system, the superhero effects tapered off and by the third week, the difference was no longer statistically significant.

This research is important because it indicates that the bacterium could potentially affect us through normal everyday contact and not just injection. Just how does M. vaccae affect people (as opposed to mice), and how much would be needed to influence us? We don’t know that yet, because that study has not yet been done. “Gardeners inhale these bacteria while digging in the soil, but they also encounter M. vaccae in their vegetables or when soil enters a cut in their skin,” says Matthews. “From our study we can say that it is definitely good to be outdoors–it’s good to have contact with these organisms. It is interesting to speculate that creating learning environments in schools that include time in the outdoors where M. vaccae is present may decrease anxiety and improve the ability to learn new tasks.”

Matthews and Jenks shared their results at the 110th General Meeting of the American Society for Microbiology in San Diego and at the Annual Animal Behavior Society Meeting at William and Mary College. For a more detailed summary of this research, see the Cosmos Magazine article, “How gardening could cure depression.” 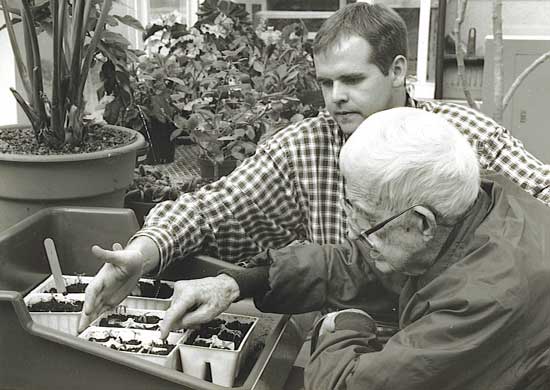 Interestingly, with gardens and horticultural therapy in healthcare facilities, practitioners often use sterile soil, in which all bacteria has been removed, to reduce risk of infection. This has been thought to be particularly important for people with immune disorders like cancer and AIDS. It’s certainly true that soil can harbor harmful bacteria as well (not to mention the occasional piece of glass or rusty nail, so make sure those tetanus shots are up to date!). But what if bacteria were found to have more of a benefit than a risk? Further research might change the types of soil that are specified for certain populations and activities.

In the meantime, gardeners have one more excuse to root around in the dirt, and parents and teachers have another incentive to let their kids play in the great outdoors.

Follow-up from March, 2011: A new study published in the New England Journal of Medicine reported that children who grow up on traditional farms are 30% – 50% less likely than other children to develop asthma. Researchers correlated the high diversity of bacteria and fungi in household dust  – from soil and farm animals – with the low likelihood of asthma. Even parents and teachers who believe in the joys of connecting with nature may hesitate to let their kids fully engage (in other words, get dirty). But perhaps a little extra soap and elbow grease at home is a fair trade for healthier, happier, and smarter kids?