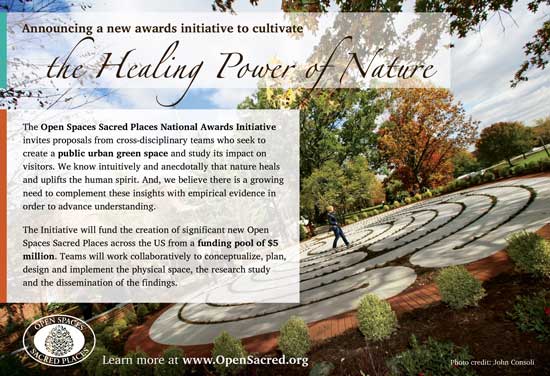 Note: An informational webinar about the Open Spaces Sacred Places Award Initiative and RFP is scheduled for February 28, 2012 from 2:00 – 3:00 pm EST. For those who can’t make it, the webinar will be available on the opensacred.org website a few days after.

The TKF Foundation announces the final phase of the Open Spaces Sacred Places (OSSP) National Awards Program.  The program is enacted in 2 phases, a Planning Grant Phase, now closed, and a final open call for proposals.

This national award program will fund cross-disciplinary teams of designers, research social scientists and community-based organizations to create and study a series of new public green spaces designed with the specific intent to provide the opportunity for a deeper human experience through a personal connection to nearby nature in cities.

Grants will be awarded from a remaining funding pool of $4 million. Funding will be provided to cross-disciplinary teams that conceptualize, plan, design and implement a physical space, conduct associated research study(s) and disseminate findings.  TKF seeks to identify projects that are replicable in their intent and projects that are generalizable in the challenges they address to serve as potential archetypes for urban areas across the U.S.

In announcing the grant opportunity, Tom Stoner, president of the Annapolis, MD-based TKF Foundation said, “In a time when we are more and more surrounded by the built world, beset by ever increasing stress and overwhelmed by technology, the need for open, sacred places in nature is more important than ever.  Every neighborhood needs a place where people can be in nature and reconnect to themselves, to place, and to each other. In order to make this vision a reality, we must document and communicate the transformational impact these spaces can have on individual lives and communities.” Stoner is also the author of the 2009 book, Open Spaces Sacred Places.

By 2030 nearly two-thirds of the world population will live in urban environments. In 2008, more than 80% of the United States population was already there. While more public green spaces are being built every day, a gap exists in the understanding of the impact of these spaces of restoration and renewal on individual and community well-being and resilience.

The Open Spaces Sacred Places Awards Request for Proposals (http://www.opensacred.org/grants) invites national partnerships of the highest caliber to apply. Universities, hospitals, research centers and cultural institutions; professionals in the field of landscape design, urban planning, and health care; and neighborhood associations, community-based and other social benefit organizations are encouraged to form collaborative teams to envision, create, study and communicate what is learned about the impact of Open Spaces Sacred Places on people living in stressful urban environments.

The TKF Foundation was created in 1996 by Tom and Kitty Stoner to provide the opportunity for a deeper human experience by inspiring and supporting the creation of Open Spaces Sacred Places, public green spaces that offer a temporary place of sanctuary, encourage reflection, provide solace, and engender peace and well being. Since TKF’s founding, 130 Open Space Sacred Place sites have been created across the Baltimore-Annapolis-Washington, DC region. Visit www.opensacred.org for more information.