Sally Schauman on the Bloedel Reserve as a Therapeutic Landscape 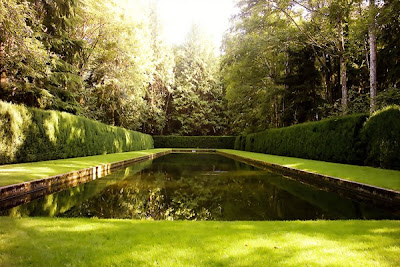 The Reflection Pool at Bloedel Reserve
Richard A. Brown photo
Copyright The Bloedel Reserve
In school, most landscape architects learn about The Bloedel Reserve, often because of its association with Richard Haag, who worked as the Reserve’s landscape architect for five years, from 1979-1984. Geoffrey Rausch and Melissa Marshall have been the Reserve’s designers since 1984, and Virginia and Prentice Bloedel had a strong hand in the design as well. Thomas Church was also involved in some aspects of the design, including the Reflection Pool, above, a joint venture between Bloedel and Church, with input later from Haag.
What they usually don’t teach in school is that Virginia and Prentice Bloedel had a strong commitment to creating restorative environments in the landscape, as Sally Schauman, FASLA, articulates in the essay below. Richard Brown, Executive Director of The Bloedel Reserve, contacted me recently about adding this national icon to the Therapeutic Landscapes Database. We’re honored to have such a culturally and historically significant garden as a new entry on our Gardens page. 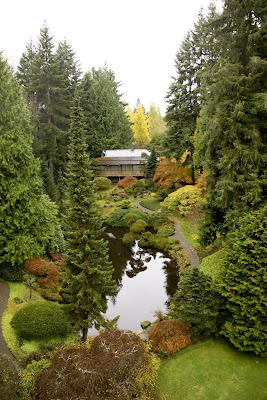 Japanese Garden at Bloedel Reserve
Photo Richard A. Brown
Copyright The Bloedel Reserve
Sally Schauman, FASLA, is Adjunct Professor in the Nicholas School of the Environment at Duke University and Professor Emerita in Landscape Architecture at the University of Washington; she is writing on a book on the subject, so this essay is a sort of sneak-preview; the working title is Earth Body Healing – keep on the lookout for its publication!
The Bloedel Reserve

A 1995, New York Times article described The Bloedel Reserve on Bainbridge Island near Seattle, Washington, as “one of this country’s most original and ambitious gardens.” Virginia and Prentice Bloedel did not create an estate garden to display horticultural specimens, their wealth or examples of European garden designs. I think they did not intend to create an estate garden at all. The recent listing of the Reserve as a therapeutic landscape is long overdue, as I believe it is one of the first, if not the first, private garden in the U.S. created mainly as a place for people to gain wellness. The arrays of healing niches to discover are wide, but they include a moss garden, reflecting pools, meadows, a skunk cabbage bog and wildlife ponds. These designed spaces cover less than half of the 150 acres, the rest is second growth forest. Several landscape architects have designed parts of the Reserve, but the overall vision and indeed, many of the details emanated from Prentice Bloedel himself.

This private and modest man did not share his motives as he created this place over 30 years, but we can surmise them from his actions. The Times writer noted that he had a “mystical reverence” for the land. A likely source for Bloedel’s deep feelings about nature was his prep school experiences in the innovative curriculum of the Thacher School in Ojia, California.  Bloedel graduated in 1917. Then and now Thacher uses camping, horses and hiking to connect each student with the natural landscape. For many, this becomes a life-long bond.

As a young man, Bloedel contracted polio. In the 16 years I knew him until he died in 1996, he walked with a limp and needed a walking stick on the Reserve paths.

“Therapeutic landscape” is not a term he used as no one else did almost 40 years ago. But I believe he felt increased wellness in the Reserve landscape and wanted to share what he felt. Most importantly, he want to intellectually explore these feelings. After giving the Reserve to the University of Washington in 1970, he created a “People-Plant Relationship Committee” within the Arbor Fund, the Reserve’s governing board and persistently explored creating a new People-Plant curriculum at the University. Unfortunately, his thinking was ahead of the University’s leadership. In 1977, Dean Philip W. Cartwright responded to Bloedel’s urging by stating “no such group of scholars existed on campus and there was little likelihood that it ever will.” Bloedel sought out the leading thinkers in environmental psychology and the emerging disciplines of horticultural therapy and landscape theory. He had a close personal friendship with Charles A. Lewis for decades and supported his book, Green Nature—Human Nature. He also funded research by Rachel and Stephen Kaplan, and Jay Appleton’s U.K. Landscape Research Group. All these scholars made several visits to the Reserve and the UW’s Department of Landscape Architecture in the 1980’s. My own special memory is a lunch I joined with only Bloedel and the Kaplans at the Reserve. Looking back and thinking about the exciting conversation, I know now I was in the presence of three pioneers.

Bloedel sought answers to penetrating questions about the relationship between humans and landscapes, but he wrote little about his intentions for the Reserve. Charles Lewis repeatedly urged him to amplify what he meant by the word, “enjoy” in the 1976 Statement of Purpose for the Reserve. In 1978, Bloedel wrote, “The omission of the words emotional, aesthetic, and spiritual in the Statement is unfortunate.” If he was alive today, I am confident Prentice Bloedel would be an enthusiastic student and supporter of the therapeutic landscape movement. He and his wife, Virginia, are buried in the Reserve near the Reflecting Pool, a space that speaks to those who enter–“be still and feel.”  For me this is the quintessential message of wellness and the Reserve.