Schoolyards should have trees and other living things 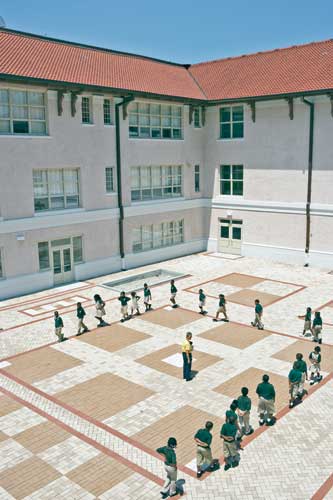 Ironically, as I was preparing to post Amy Lindemuth’s piece on landscapes in prisons last week, I came across an article in Landscape Architect and Specifier News that had a picture of what looks like a rather bleak prison courtyard with no trees or other vegetation, just a two-toned paving grid. ‘How sad,’ I thought, ‘We still have such a long way to go.’  And then I realized that the people in the photo weren’t prisoners, they were children! Children at an elementary school in New Orleans, Louisiana. So here’s my Letter to the Editor (which has since been published in the February 2011 issue, Vol. 27, No. 02, p. 14).  As I say at the end of the letter, to me this is an example of failure, not success. Fingers crossed that they print it, and fingers crossed that this type of design is a dying breed.

Letter to the Landscape Architect and Specifier News Editor regarding “Another Brick in the Wall.”

When I first saw the feature image for Bruce Soileau’s article on the new Andrew H. Wilson Charter School courtyard (“Another Brick in the Wall”), I thought I was seeing a prison courtyard, and my heart sank at the huge expanse of paving with no plant material or any other kind of shade in sight.  Even inmates deserve some relief from paving, no matter how “interesting” the pattern (and the visual interest of the two-tone pattern here is debatable). When I realized I was looking at a newly designed courtyard for an elementary school, my sadness turned to anger. When a school gets a chunk of disaster recovery money, this is the best they can do? I understand that the school, not the designers, set the program. They wanted their large interior courtyard to be paved “entirely except for four planters that were installed” (of which there are no pictures in the article). What a shame. What an incredible missed opportunity to do something truly green and sustainable – for the planet, and for the children and teachers at this school.

This is New Orleans. How many months of the year will this courtyard be unusable due to extreme heat, glare and danger of sunburn? Even if no other plant material had been used, trees in this courtyard would have provided much-needed shade for people using the courtyard as well as for the building. Trees, in addition to providing green life, reduce the heat island effect significantly.

I wish someone had given the school administrators and the architects and landscape architects (if there were any) Sharon Danks’ new book Asphalt to Ecosystems: Design Ideas for Schoolyard Transformation and Richard Louv’s book Last Child in the Woods before the design program was established. And I wish that someone had pointed them to the Children & Nature Network (www.childrenandnature.org) and the Therapeutic Landscapes Network (www.healinglandscapes.org/related-play) for a stack of research on how important access to nature is for people’s health and well-being, and especially for children’s mental, physical and emotional development. 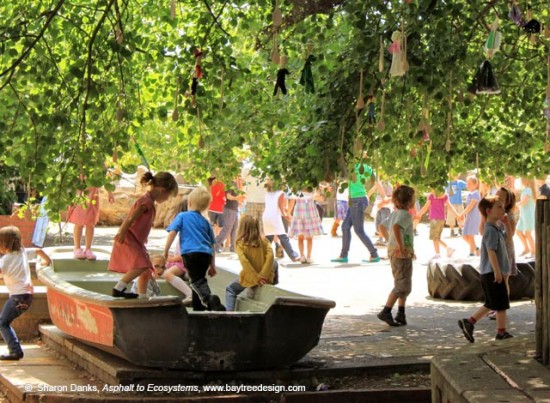 The Coombes School in England. Photo by Sharon Danks.

Sure, an interesting permeable paving pattern is preferable to asphalt, but come on. Really? A two-tone checkerboard pattern? Is that truly the best that the designers could come up with? And was there no way to convince the school to reach beyond an all-paved program? Children – all people, really, but especially children – need stimulation. They need access to nature. They need shade! To me, this schoolyard landscape is an example of failure, not success. Unfortunately, it’s the students, teachers and staff who will have to make do with it.

Addendum: I received this comment on February 2nd, which gives hope that things are not quite as bleak as they seem. I’m grateful to the person who commented, and I’m reprinting it in the body of the text here because it’s an important piece of the puzzle:
I was personally involved in the project pictured and have some background about the image in the magazine. It is the result of marketing personnel jumping the gun to produce an marketing campaign based on their products. The article was published about a particular brick used in the courtyard of this New Orleans school. The landscape plan has been designed and is waiting funding. In the upper right there is one of four large planters in the courtyard. Adjacent to the courtyard there is a grassed playyard with large live oak trees. There was even an educational wetlands designed for this area, but was postponed due to funding. There are also 4 additional grass playyards that are all nestled under 100 year oak trees. None of these are pictured because they did not include bricks which were being marketed. This is the result of taking an image of one area of an entire project. With only seeing the one image it is a terrible bleak place, but hopefully after funding it will be as nice as the rest of the playyards. Just wanted to let you all know that there is more to the picture. Thanks.