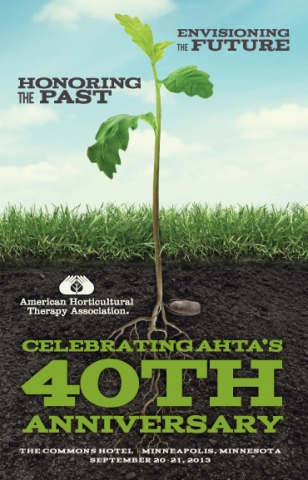 “Honoring the Past…Envisioning the Future”

The American Horticultural Therapy Association (AHTA) is celebrating its 40-year anniversary, so you know their annual conference is going to be a rockin’ one.

Where: The Commons Hotel in Minneapolis, Minnesota
When: Friday and Saturday, September 20th and 21st. Pretours are scheduled for Thursday, September 19th.

This year’s anniversary celebration will feature past AHTA presidents and luminaries from the field, as well as a host of international presenters who will discuss their research, practices, and the future of horticultural therapy. New this year and included in your conference registration fee is the 2013 AHTA Anniversay Gala Dinner.  Help us honor our 2013 AHTA Annual Award winners and recognize those who helped shape AHTA through the past 40 years. 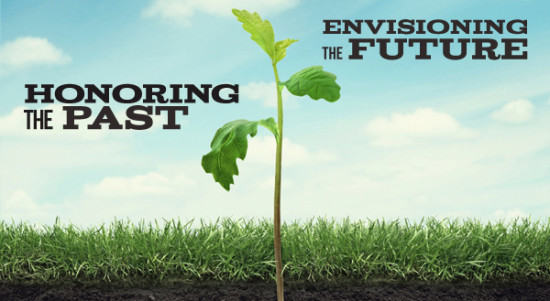 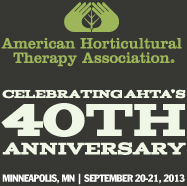 This year’s American Horticultural Therapy Association conference celebrates AHTA’s 40-year anniversary. Numerous international presenters as well as past AHTA luminaries will present their research, practices, and the future of horticultural therapy on September 20-21, with pre-conference tours on 9/2o, in Minneapolis, MN.

Presentation proposals are being accepted until March 31 in the following areas:

• Current research in horticultural therapy including other allied and adjunct professions;

• Implementation and sustainability of horticultural therapy programs, particularly those in non-traditional settings;

• Successful practices and programming strategies (including goals, objective and methods);

For details about registration and programming and to learn more about the Request for Proposal process, visit the AHTA Conference page. 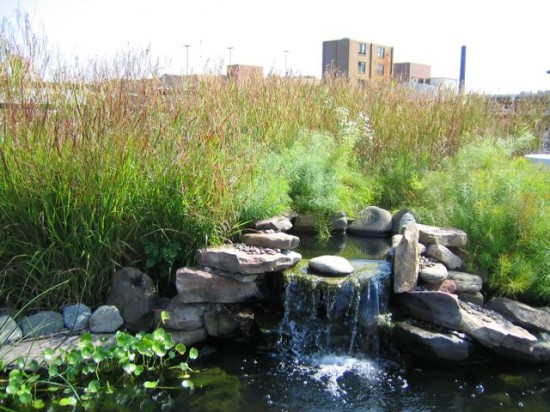 The American Horticultural Therapy Association (AHTA) is teaming up with the Chicago Botanic Garden for this year’s annual conference, on October 13-16. The 2010 theme is “In Our Nature,” and will feature keynote speakers Gene Rothert and Linda Emanuel; tours of HT programs and gardens and exemplary school gardens; two pre-conference workshops; and a terrific lineup of education and poster sessions. I’ve gotten to visit Chicago twice in the last year, including the Chicago Botanic Garden and the Schwab garden pictured above (designed by Gene Rothert and Martha Tyson, and also on one of the AHTA conference tours), and this city is really worth the trip; SO many great gardens, and Chicago’s downtown is vibrant and exciting. I attended last year’s AHTA conference in Pasadena and learned a ton while meeting a whole lot of great people. AHTA and CBG both do it right, so this year is sure to be fantastic.

Early-bird registration for In Our Nature ends on 9/1 (which is in less than a week!), so sign up now. More information and registration on the AHTA website.