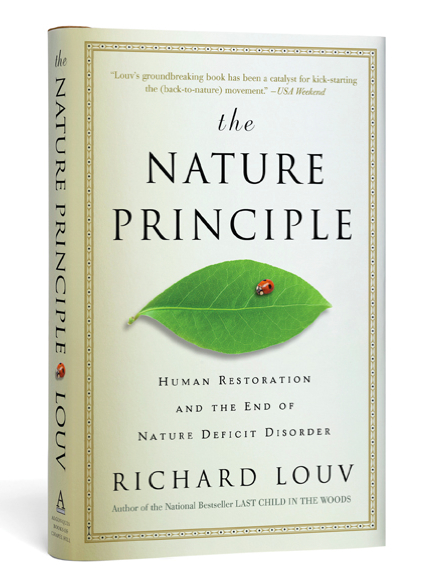 And while we are in book mode…

Lisa Horne’s review of Richard Louv‘s newest book, The Nature Principle was first posted on The Field, ASLA’s (American Society of Landscape Architects) Professional Practice Network blog. Which, if you haven’t checked it out, is worth a look, and even a bookmark. Lisa and ASLA were kind enough to allow the TLN to share the review here:

Seven years ago, Richard Louv coined the term “nature-deficit disorder” in his book Last Child in the Woods: Saving Our Children from Nature-Deficit Disorder. He is now giving us possibilities to move beyond it in The Nature Principle: Human Restoration and the End of Nature-Deficit Disorder. While the first book looked at nature’s absence from children’s daily lives, the second recognizes that the need for nature extends to all of us. The Nature Principle, as articulated by Louv, provides that nature is crucial for humans to be healthy—physically, emotionally, and spiritually.

A strong thread of hope and optimism runs through these pages. Louv notes that arguments for environmental change have run from a first generation warning of catastrophe to a second generation argument of economic benefits to a third generation assertion that the environment impacts our well-being (Louv 284). Another unique concept he identifies is the value of human energy. Designers often think in terms of energy efficiency, but the human spirit renewed and refreshed by nature brings energy into a system as well.

While the book could be organized better, its succession of overlapping concepts that are supported by studies, interviews, and the occasional anecdote, keeps the reader’s interest. But its greatest features are clarity and an obvious reflection of Louv’s enthusiasm. His background as a journalist serves him well. He is able to transform studies filled with jargon and subtle nuances into lucid concepts and brief conclusions. As needed, he cites study limitations and peer objections and leaves readers to draw their own conclusions. He is also able to bring to life interviews with leaders in the forefront of this field with perceptive details and insights.

Another benefit is the breadth of support documents. He includes four pages of Suggested Reading, an extensive set of Notes, and references to familiar concepts such as biophilic design, the urban park movement, native plants, suburban sprawl, inner city redevelopment, and concerns about light pollution.

For all of its comprehensiveness, the book’s most noteworthy exception is any reference to landscape architects. He mentions architects and urban planners frequently in the chapters on suburban sprawl and urban renewal, and cites Frederick Law Olmsted’s work. But only in the last chapter does he include our profession in the laundry list of career options with nature. This omission is critical. We can only hope that after Louv spoke at the ASLA’s Annual Meeting in San Diego last year, he has a better understanding of our work, and that we, in turn, can gain insight into a movement that should become more important to us.

Lisa Horne, RLA, Associate ASLA, is an associate at Kevin Sloan Studio in Dallas, Texas. She is the co-chair of the ASLA Children’s Outdoor Environments Professional Practice Network and loves being outside by White Rock Lake whenever she gets the chance. She may be reached at: lh(at)kevinsloanstudio.com.