When Conservation was Patriotic, and Why You Should Visit National Parks with Your Kids 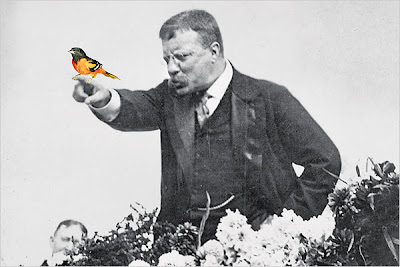 The New York Times Book Review last week featured Jonathan Rosen’s review of The Wilderness Warrior: Theodore Roosevelt and the Crusade for America, by Douglas Brinkley. This looks like an excellent book, and the review was pretty great, too. Who knew that old Teddy Roosevelt saved over 235 million acres over the course of his tenure in the White House?

In fact, he was a passionate naturalist and conservationist. “For Roosevelt, living forests and petrified forests, bird preserves and buffalo ranges were essential for the country’s survival as a moral and military power.” Yes, indeed. He didn’t want to just keep open space because it was pretty. Roosevelt really believed that a nation that preserved and enjoyed the great wild outdoors was stronger and better than those that ran roughshod over everything with no thought to larger consequences and future generations.
Theodore Roosevelt felt a strong connection with John James Audubon and Charles Darwin, and had close relationships with – among others – John Burroughs, Frank Chapman, George Bird Grinnell, and Sierra Club founder John Muir. These relationships, and his own commitment to wild landscapes, led to the creation of several new national parks, bird reservations, reclamation projects, as well as the National Wildlife Refuge System.
Theodore Roosevelt’s fifth cousin (and also nephew-in-law, sort of…), Franklin Delano, was no slouch when it came to the environment, either. “A nation that destroys its soil destroys itself. Forests are the lungs of our land, purifying the air and giving fresh strength to our people.” Many New Deal projects involved creating and improving the infrastructure of state and national parks. Roosevelt personally believed in the restorative effects of nature, as can be seen at the Franklin D. Roosevelt National Historic Site in Hyde Park, NY. FDR also encouraged the planting of Victory Gardens, which of course the current White House family is doing again now.
What does any of this have to do with us in 2009? Well, plenty, but I’m thinking specifically of a report published by The Nature Conservancy in 2008 about the precipitous drop in attendance to national parks in the United States. The researchers found a direct correlation between children’s involvement with nature and the likelihood of those children to care about and become stewards of the environment as adults. So, those kids who don’t want to go outside because “there aren’t any electrical outlets out there” (loosely paraphrasing Richard Louv here) will grow up without any of the kind of positive association or reverence that spurred both Roosevelts to do so much. National Parks? Who needs ’em? Drill baby, drill! Yeah, scary indeed. So, go do your patriotic duty: Take a hike, roll around in the grass, plant a Victory Garden, enjoy nature and teach your kids to do the same. They will thank you for it, and you, in turn, will thank them.